What is a Noon Sakinah?

Basically the Noon Sakinah is a Noon ن devoid of any vowels; namely the Kasra كسرة, fatha فتحة, and dammah ضمة. In the Quran, the noon Sakinah can be depicted with a Sukoon سكون above it or without anything above it at all like this ن. It is important to note that both have the same pronunciation and are called Noon Sakinah. Here's an example of a Noon Sakinah in the Quran: 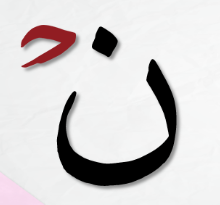 The tanween is an extra Noon Sakinah used with the Kasra كسرة, fatha فتحة, and dammah ضمة:

The noon of the Tanween is pronounced but not written:

Izhar (إظهار): In which a Noon ن is read clearly

When you find the following signs in Quran with tajweed, you should know that you have to pronounce the tanween clearly:

Idgham (إدغام): the Noon changes into a different letter

As we previously discussed in our previous article in the series “Learn Quran with tajweed rules: Ghunnah and Idgham” , there are two types of Idgham; One with ghunnah and one without ghunnah. In this article we will expound more on examples of Idgham without ghunnah, also known as Complete Idgham (إدغام كامل), in which the letter noon changes into the letter following it when it is either a Laam ل or Raa ر.

Iqlab (إقلاب): in which a Noon Is merged into the next letter:

Iqlab is when the noon sakinahor tanween is changed into a meem م when it is followed by a baa ب.

The equation of Iqlab (read from right to left) is:

An example of Iqlab with Noon Sakinah:

Ikhfaa (إخفاء): the Noon is hidden and is not clear

The fourth and final rule of Noon Sakinah and Tanween is the Ikhfaa, characterized somewhere between Izhar and Idgham with Ghunnah. Ikhfaa in Arabic means “to hide”. This is exactly what happens to the Noon Sakinah or Tanween in this case. The sound of the noon fades into the sound of the letter following it accompanied with a ghunnah sound. The letters causing Ikhfaa are all the remaining Arabic letters after excluding the Arabic letters causing Izhar, Idgham and Iqlab.

There are three levels of Ikhfaa concerning each group of the remaining Arabic letters depending on the proximity of the articulation point of a letter and the letter noon. The closer a letter’s articulation point to the noon, the stronger the ghunnah sound emitted and the closer the Ikhfaa is to Idgham and vice versa. These levels are:

Their articulation point is close to that of Noon. Strong Ghunnah. Ikhfaa is more like Idgham.

Their articulation points are not too close to that of Noon and are not far fromn it. Ghunnah is in between.

Their articulation point is far from that of Noon. Very week Ghunnah. Ikhfaa is more like Izhar.

We hope this article helped you in your quest to learn Quran with tajweed rules. We at Nour Academy strive to facilitate your path to learning Arabic and Quran with tajweed rules, which is why we specifically developed interesting curricula for those who wish to learn Arabic online and take Theoretical tajweed classes online. If you fit the criteria, be sure to check our broad spectrum of online classes and await our weekly articles for more Arabic and tajweed lessons.